San Francisco Ballet is saddened by the recent loss of longtime Trustee Margaret Gill, who passed away April 17 at age 80.

Margaret and her husband Dr. Stephen P. Gill have supported many SF Ballet initiatives and have been subscribers for more than 30 years. From tours and ballet sponsorships, to the annual Gala (for which they served as Honorary Gala Chairs in 2007), they have been stalwart supporters of SF Ballet and Artistic Director Helgi Tomasson’s vision for the Company. The Gills were part of SF Ballet’s 75th Anniversary Sponsors Council with a gift that supported the 2008 world premiere of Christopher Wheeldon’s Within the Golden Hour, which has been revived numerous times and presented on many tours. Their sponsorship also supported SF Ballet’s 2008 American tour to Chicago, New York City, Costa Mesa, CA, and Washington, D.C. Margaret and Stephen enjoyed traveling with the Company, joining SF Ballet on tours to New York, London, and Paris. 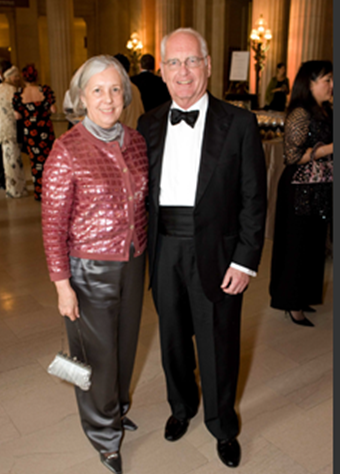 Over many years they have generously sponsored ballets that exemplify the diversity of the SF Ballet repertory. Notably, they were sponsors of the 2010 SF Ballet premiere of John Neumeier’s The Little Mermaid and the 2011 world premiere of Yuri Possokhov’s RAkU. They have also supported beloved classics such as Helgi Tomasson’s Swan Lake and The Sleeping Beauty. Last season they were Major Sponsors of Cinderella by Christopher Wheeldon, one of Margaret’s favorite choreographers.

Margaret and Stephen also established endowed funds to support new works and touring and were members of the Jocelyn Vollmar Legacy Circle. In 2005, the Stephen and Margaret Gill Family Foundation was named a Great Benefactor, a recognition acknowledging donors who have made cumulative gifts of $1 million to the Ballet.

Margaret was recognized as one of the most influential general counsels in America. As a partner at Pillsbury, Madison and Sutro (now Pillsbury Winthrop) for nearly 30 years, she was widely regarded as one the top merger & acquisitions defense experts in the United States. Her career moved her to AirTouch, where she worked on the regulatory and business strategy that shaped the developing cellular marketplace. She led the process to get federal and state approval of the spin off from Telesis, and later for the sale of AirTouch to Vodaphone.

Her incredible acumen was a great resource for the Ballet. “Margaret was a longtime trustee and friend,” says Helgi Tomasson. “I always enjoyed seeing her at the theater and her meaningful support of this Company meant a great deal. She will be missed.”

Margaret joined SF Ballet Board in 1991 and served as Vice Chair and as a member of the Executive Committee. She also served on the Board of the United Way Bay Area and on the Board of Directors of the Episcopal Diocese of California.

In addition to her husband Stephen, Margaret is survived by their children, Elizabeth and Richard, and their families.